Have you heard about our new Valentine's Dating Bingo in collaboration with Dabbers Social Bingo? If you haven't then you must've been living under a rock!

Our brand new event launches this Tuesday 12th February with a Valentines Special. Bingo is the latest form of competitive socialising to hit London and I have to say it's my favourite!

I attended Dabbers Social Bingo - the bingo hall for the 21st Century and I can tell you it does not disappoint! This purpose built bingo is decked out with contemporary bingo benches, leather seats and centre stage is a custom built bingo machine that's rumored to be made from the old national lottery machine 'Lancelot'. The bar has everything you might want from spirits, craft beers by the likes of Brewdog and even Dom Perignon.

Forget boring old bingo callers, Dabbers have live entertainers delivering the numbers and some lols for good measure. They've truly turned this great British pastime into a hoot and we've joined forces to create the liveliest dating event the world has ever seen! 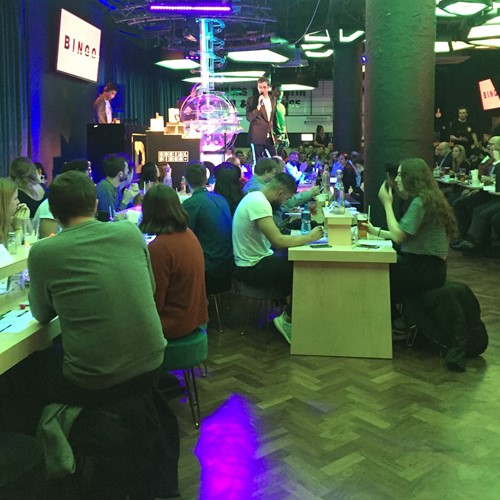 So what can you expect from this event?

Dating Bingo really will be the dating event with balls! The age old saying that dating is a numbers game has never been more true. This event will see you join around 100 singles playing 5 games of super-fast 36 ball bingo. You'll move around the hall to play each game with a new group of bingo daters with tons of time to chat and get to know one another. There's some fabulous prizes to be won from the weird and wonderful to the crème de la crème.

All your bingo games and entry to the hall is included in the ticket price as well as post event matching and messaging – you'll even get your very own bingo dabber to take home!

Valentine's Dating Bingo will be like no other dating experience and is already down to the last handful of tickets. Grab your ticket before it's too late. See you next Tuesday for the best Valentine's dating event in the UK!

A London speed dating event is split into two halves, each lasting around an hour, there will be an interval at half time of about 15 minutes. You will have between 4 and 5 minutes with each person, after which you need to tick a box on your score sheet - "yes, I would like to meet this person again" or "no. Thanks but no thanks". Or "friend" if you'd like to get to know them platonically. Make sure that you do this after each date to keep track. Afterwards there is an opportunity for everyone to meet and mingle informally - this is often where the real action begins, so make sure you don't disappear too quickly!