Home Blog How to get the most out of speed dating

How to get the most out of speed dating

A lot of people think speed dating is a series of short first dates – it's not.

Sure it's the first time you've met this person you're speed dating but it's not exactly a first date. On a first date you'll no doubt have put aside an evening to have a few drinks or a fun activity to get to know someone better. You'll have probably met them in some shape or form before the date and now you want to find out who they really are and if they're someone you're compatible with. A first date is the proper 'get to know one another' – where you grew up, what you did at uni or embarrassing childhood stories. You don't want to be talking about this when you've only got 4 minutes.

But how did you end up on this first date? Did you get chatting while waiting to be served at a bar then exchange numbers? Is it someone you'd seen regularly at your bus stop and plucked up the courage to ask out? Or a friend of a friend who you had a laugh with at a house party? These are speed dates. These brief encounters with new people that happen everywhere and anywhere. They're the initial meet.

We've all been served coffee by someone or been asked for directions by someone we've quite fancied, we haven't asked them what school they went to but we've decided from a short exchange in conversation that they're someone we like. But half the time we don't ask them out because that seems a bit forward or maybe it's just too brief. Speed dating is these brief encounters but a safe environment where we know that they're here for the same reason – to meet other single people while having a fun night out. That's all these 4 minute dates are, a chance to see if there someone you'd like to set a whole evening aside for but instead of waiting for chance we're having 20 brief encounters in one night.

So how do we get the most out of these 4 minute encounters?

Well first of all you need to be in it to win it. It's about picking the right event for you. With Original Dating we have a huge selection of events to choose from.

Are you looking to date someone who lives/works/goes out somewhere near you? Then maybe you want to pick an event based on its location. In a recent twitter poll conducted by ourselves we found people were willing to travel up to 2 hours to see someone they were dating.

Ultimately it's about knowing yourself and what you're looking for. For example, if someone with a sense of humour is very important to you, maybe our hilarious Dating Against Humanity is the event for you.

How to be the best you on the night.

As I explained earlier, speed dates aren't first dates and with only 4 minutes each date, you don't want to be wasting it by talking about work. Who really wants to talk about work, having probably just came from work to speed dating. We're here to have fun right?

Why not watch our YouTube vlog for the Top 5 Speed Dating Tips. 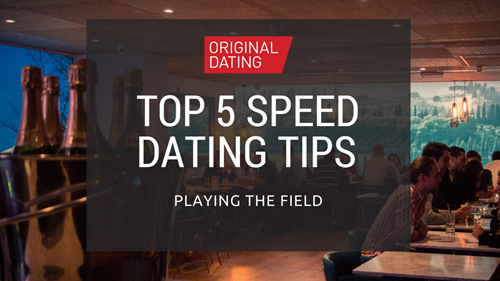 Remember it's not just you and them on a date, it's you, them and another 30-40 men and women, so you don't want to be having the same conversations as everyone else. You'll never stand out from the crowd but instead blur into the dating pool that bored them by talking about work.

Don't take it or yourself too serious. Most people go speed dating for a fun dating experience, yes a dating experience but they want to enjoy it too, so enjoy yourself. People are attracted to fun.

It might be a good idea to have a bank of fun questions which you can default to. Why not think of things that are important to you that you might want to find out. If you were looking for a partner who also likes going to music festivals, ask them who the last band was they seen live.

I'd say one of the most important things anyone can do on dates and life for that matter, is listen. Don't listen to reply but listen to understand. What I mean is a lot of people will ask a question or start a topic of conversation because they feel like they should take the reins but not even bother to hear them out. They think the act of asking or talking is more important, but it’s the connection that is most valuable. Which leads me on nicely to my next point.

How to get the most out of your date.

You have to remember that dating is a two way street and we sometimes focus so heavily on how we come across or impressing them that we forget to learn about each other. That's why I can't stress enough how important listening is.

Focusing on them is a great way to keep your focus off yourself. They will ask about you so don't feel the need you have to drop in off topic information about how great you are. Trust me, nobody likes a show off.

Going back to our bank of fun questions, really use these as an opportunity to get to know them. The way someone speaks to a waiter can tell you a lot about the real them. So don't focus on the where you grew up, get creative. If you could have dinner with one celebrity, who would it be with and why? What was the first album you ever bought? Or if you could be a piece of furniture what would you be and why? Ask interesting questions - you'll get interesting answers.

Apart from the cliched and cliched for good reason because they're true, like be yourself, the best way to get the most out of speed dating is to have fun. Speed dating is a fun way to meet people but it's not a first date, not yet anyway but it will more than likely lead to a few.

I should also add that because you go speed dating once and it didn't quite work out or you weren't on you’re A game, remember who ever had one first date and never looked back or swiped once on a dating app and never had to use it again.

So to get the most out of speed dating – enjoy yourself. If you're having fun then the chances are they're having fun and the rest will take care of itself.